DISCOVERY OF THE JAK2 MUTATION

From 2006 to 2015, several labs, including a lab funded by the MPN Research Foundation (Josef Prchal at the University of Utah), performed critical research that led to the discovery of JAK2V617F – a single-point mutation that is found in approximately 63% of MPN patients.

The MPN Research Foundation acted quickly on the discovery of JAK2, mobilizing three labs (Gary Gilliland at Harvard, Ayalew Tefferi at Mayo, Ronald Hoffman at University of Illinois & Mt. Sinai) to collaborate in an effort to perform preclinical testing of compounds that inhibit JAK2.

As a result of this four-year endeavor, a number of compounds advanced to human clinical trials, one new drug was approved (Jakafi) and an extensive tissue bank at the Mayo Clinic was made available for subsequent testing of MPN therapies.

The MPN Research Foundation continues to fund innovative projects on the leading edge of the MPN research. For more information about the impact of our research funding on MPN treatments and therapies, sign up to receive the most recent news and updates.

Learn more about JAK2 treatments for MF, PV and ET 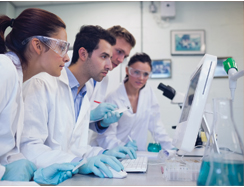 Get MPN research reports from the American Society of Hematology.