HIKERS WITH HEART - MAKING A DIFFERENCE ONE STEP AT A TIME

Michele Couri was diagnosed with PV eight years ago at forty-years-old. Over those eight years, she often sought the advice of the late Bob Rosen (former President of MPN-RF.) And it was the advice of her late mentor and friend Bob Rosen that has stayed with her. “He told me that I would know when the right time would be. His message is my message as well. When you are ready to truly dedicate yourself to this cause, nothing can stop the momentum. It will come naturally and from the heart.” And 2019 was the year Michele created MPN Peoria; a hiking event was an easy choice for Michele who loves the meditative and restorative qualities that spending time in nature provides. 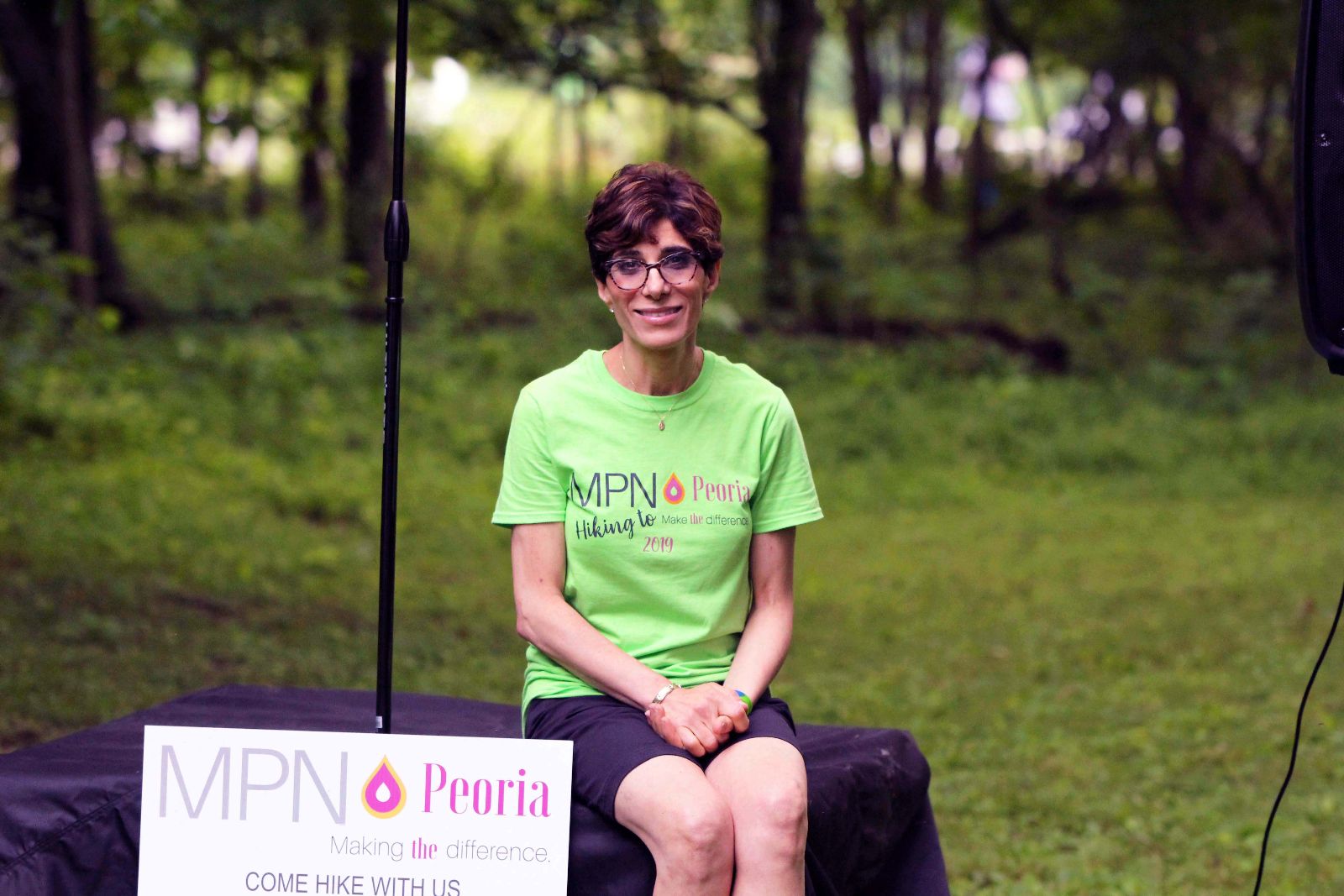 Michele is a full time practicing OBG/YN, mother of six, and PV patient, but still managed to find the time to pull off a very successful hike that raised $59,500 and had 425 registered participants. “I don’t have a background in fundraising, but my co-chair Mary Walsh does so she was absolutely invaluable. Without her, none of this would be possible.” She says.

Michele is also inspired by her patients, community, and family who showed up to support her and everyone else living with an MPN. “The day of the hike was truly one of the most memorable events of my life…looking out over the crowd of hundreds of hikers and realizing that all these wonderful, caring and generous people came to support all of us living with MPNs was unforgettable.” She says.

Michele’s advice to the MPN community: “Don’t be afraid to put yourself out there and be vulnerable. Starting MPN Peoria was a risk, but I was willing to take that risk so that I can make a difference in the lives of MPN patients.” And that she did. Thank you, Michele Couri.

“It’s not that difficult to make a difference and putting my energy towards helping others has helped me. I don’t feel helpless with this disease, I feel empowered.” Julie Libon MF Patient

Hikers have come from as far away as California, British Columbia, and England to show their support for Hike MF an annual event that takes place at Borderland State Park in North Easton, MA. Sisters Lori Small and Julie Libon, only 17 months apart in age, have always been close, so it was no surprise that when Julie was diagnosed with MF in 2014 her sister Lori was ready to help her organize and plan Hike MF.

“It was just a matter of days after my diagnosis that we decided to host a hike. We grew up hiking in the mountains of NH, Maine, and VT, so we thought a hike would be an homage to our parents…we thought we’d raise a few hundred dollars and have about 25 people show up at the first hike. We figured if we had music and food people would be happy. Well, it worked, we had 125 people sign up that first year and raised $25,500. Lori set the high standard that year for how HikeMF would run.” Julie says. 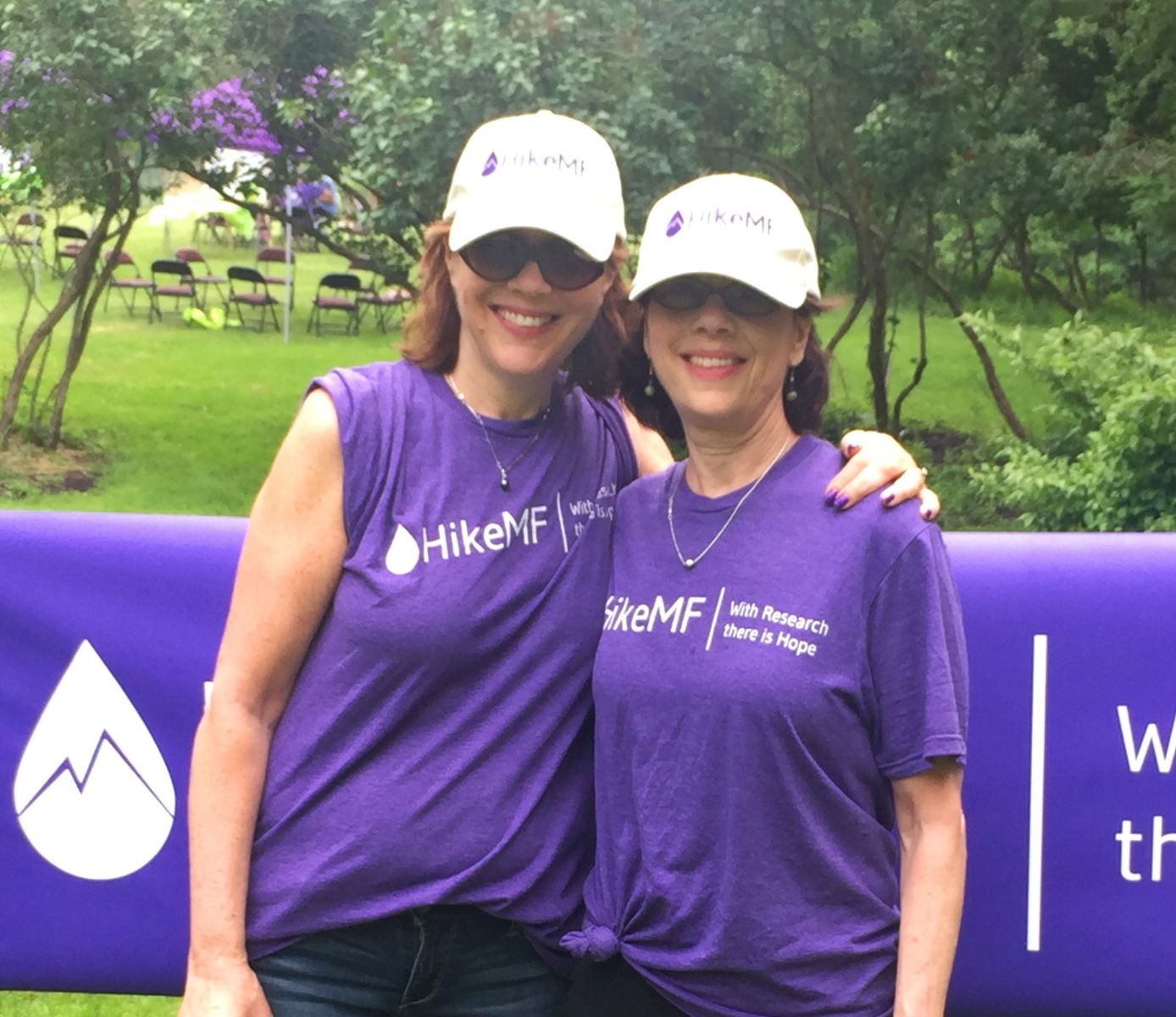 Julie credits Lori with the hikes continued success which the sister duo has hosted for five years. They’ve planned the event each year like they would plan a party. Their goal has been to make sure participants have fun, feel welcome and of course raise money for research.

“Without Lori, Hike MF would not exist. I’m so fortunate to have Lori as my sister, who I consider the strongest, most caring, and loyal person.” She says. And Lori will help her dear sister for as long as it takes, “I continue to organize and participate in this event because there isn’t a cure yet for MPN’s.” Lori says.

Julie and Lori’s positive and take-charge attitudes have made a difference. In the five years since Julie has been diagnosed, Hike MF has raised close to $190,000 for MPN research. “It’s not that difficult to make a difference and putting my energy towards helping others has helped me. I don’t feel helpless with this disease, I feel empowered.” Julie says.

Provide support for other MPN Patients.

Living with an MPN can be challenging. You are not alone.

These represent first person accounts of real people living with Essential Thrombocythemia, Polycythemia Vera and Myelofibrosis. It does not represent the views or opinions of anyone associated with the MPN Research Foundation. Please consult your doctor before taking any action to manage your health.