“GETTING MY DIAGNOSIS WAS LIKE BUYING A TICKET FOR THE BIGGEST ROLLER COASTER THERE IS... UPS AND DOWNS ALL OF THE REST OF THE WAY, AND WE’RE STILL RIDING.”

An Unexpected Journey
*This story is a patient’s first-person experience and is not an endorsement of any drug or activity by MPNRF. Please consult with your physician (preferably an MPN specialist) before making any therapy or lifestyle change.

It was August 22nd, 2016, Tracy’s birthday. Mike was on his way to meet Tracy and her mom for a birthday dinner when he received a phone call, a phone call that would set everything into motion and change the foreseeable future.

Mike was directed by his doctor’s office to report to the ER immediately. A recent CT scan showed something alarming; Mike’s spleen was in danger of rupturing. Tracy thought he was joking when he called her; it just didn’t seem believable. The past year Mike felt a little more tired than usual and had lost some weight, but he wasn’t expecting anything dramatic. Mike wasn’t sure what was happening now, but all too soon it would become quite clear.

The next few weeks seemed to last forever as Mike and Tracy waited to understand what was going on. Doctors had suspicions but wanted to run more tests. And on September 22nd, exactly one month after the initial phone call, it became clear something was wrong, terribly wrong. Summer had faded, and so had Mike’s old life.

On September 22nd Mike was diagnosed with intermediate stage 2 Primary Myelofibrosis. His doctor at the University of Kansas Medical Center laid it out before him. Because of the progression of his disease, he was on borrowed time. Mike needed a stem cell transplant (SCT).

And so began Mike and Tracy’s unexpected journey together. A journey nothing could have prepared them for. A journey that was set into motion with a phone call on an August night.

The twenty-second had become an ominous day for Mike and Tracy. And now it was November 22, 2016. However, this time, on this date, Mike had some control over the matter that confronted him; he had made a choice and was preparing for the fight of his life.

Fortunately, a match for Mike had been found and he could move forward with an SCT. And on November 22nd Mike signed the consent forms to undergo an SCT at the University of Kansas Medical Center.

“Getting my diagnosis was like buying a ticket for the biggest roller coaster there is. Signing the consent forms was like standing in line and getting in the car. The night I started chemo was just like when the roller coaster hits the bottom of the hill and you hear the clickety-clack, clickety-clack and the car lurches forward going, up, up, up and you know there is no going back. When you receive the stem cells it’s over the top of the hill baby! Ups and downs all of the rest of the way, and we’re still riding.” Mike says.

In early December Mike checked into the hospital and began chemotherapy to prepare for the transplant. His anonymous donor, only known to Mike as a twenty- six -year- old male somewhere in Europe, was simultaneously preparing as well. The donor’s cells were harvested, quickly flown to the United States, and then sent to the lab. And finally, this hope for a new life for Mike arrived in an unassuming blood bag in his hospital room. On December 13th, 2016 the donor’s stem cells were transfused into Mike’s veins and slowly began to take life in his marrow. The roller coaster was reaching top speed.

Mike’s partner Tracy was along for the ride too and was with him each step of the way. She washed his bath towels daily, wiped down the shower regularly, kept visitors at bay so he wouldn’t catch a virus, and challenged him to keep moving and do more as he regained strength. “I couldn’t have made this without my partner Tracy.” He says. Yet Tracy felt the weight of a heavy responsibility resting on her shoulders. She didn’t want Mike to become ill post-transplant because of something she could have prevented. Tracy was working fulltime and trying to keep the house clean and germ- free, but still managed to stay positive and take care of herself. “The best advice I received that I’d give to all caregivers is to make sure to take care of yourself. A sick, tired caregiver is of no good to the patient.” She says.

It was Mike’s outlook too though that kept things in perspective. Mike will find humor in any situation, even an SCT. “I had to drag around an IV pole for a month. We were very close so I named him Skinny Pete. I decorated him at Christmas. He followed me everywhere. Unfortunately, we don’t keep in touch much now.” He says.

Mike also decided to name his spleen to lighten the mood. “When I was diagnosed my spleen was 27cm, five times larger than normal. I didn’t have pain but I could feel it. I decided to name him Steve. It also made it easier for people to inquire about me. Rather than saying, ‘How’s your spleen?’ (which I think is an odd thing to ask someone) people would ask, ‘How’s Steve?’ It also made people comfortable talking to me about it. We didn’t like Steve at all until we realized that he was working overtime to help my bone marrow make cells. We like him now.” He says.

Of course Mike still has his challenges post-transplant; he admits though he has been fortunate to get through this transplant with minimal complications, but still worries about triggering GVHD through sun exposure, being in contact with a sick person, or eating something that could make him sick. But Mike has come to an understanding that he’s lucky to be alive and the glass resting next to him is half full. “I pretty much live as I did before. I go to work, sleep 6-8 hours a night, go to dinner with friends, and travel a bit.”  He also has a few mantras that help him to work through the challenging moments.

Every day above ground is a good day.
It could be worse. It could always be worse.
You’ve been through hell so why are you watching TV? Do something!

Yet not everything is a challenge though if you can view it through Mike’s eyes. Although the prednisone he has to take caused cataracts, they were corrected with new lenses. Mike happily reports his vision is the best it’s been since the sixth grade. “I can see the details on the moon for the first time in years, who knew that this would be a bonus from all that I have gone through.” He says.

And Mike is very grateful for the care he received while in the hospital, and from family and friends. “I can never say enough good things about the people who have helped me. There were so many people involved that I never even met, the courier transferring the stem cells, the pharmacist, the people working in the lab, to my donor. When you start to add it all up, it’s overwhelming. I know how lucky I am and truly am surrounded by angels…” He says.

His advice to others about to undergo an SCT is direct and practical. Follow the doctor’s order to a T, get a tablet that you can video chat with (you might not be allowed visitors), be prepared with books and movies to keep you occupied, and walk every day. “I never wanted to walk but did (with strong encouragement from Tracy). It’s hard enough for your body to come back from the chemo and SCT, and if you have to deal with additional issues it’s even harder.” He says.

Mike also suggests not browsing Facebook groups for your illness. “Ninety percent of the postings are people struggling. While I believe it is a great outlet for them and a place to get support, most of their stories can be scary. Not enough people that have had positive experiences post so it is weighted negatively. It will play tricks with your mind.” He says.

Attitude is also important in Mike’s recovery. For those facing this hurdle, he says, “Believe you will get through this and don’t give up. Trust your medical team.”

Although Mike’s life is as normal as he can hope post-transplant, there’s still something though he and Tracy would like to do. They would love to one day meet Mike’s donor and personally thank him for his selfless act of saving Mike’s life. And maybe someday they will meet him, on the 22nd perhaps. 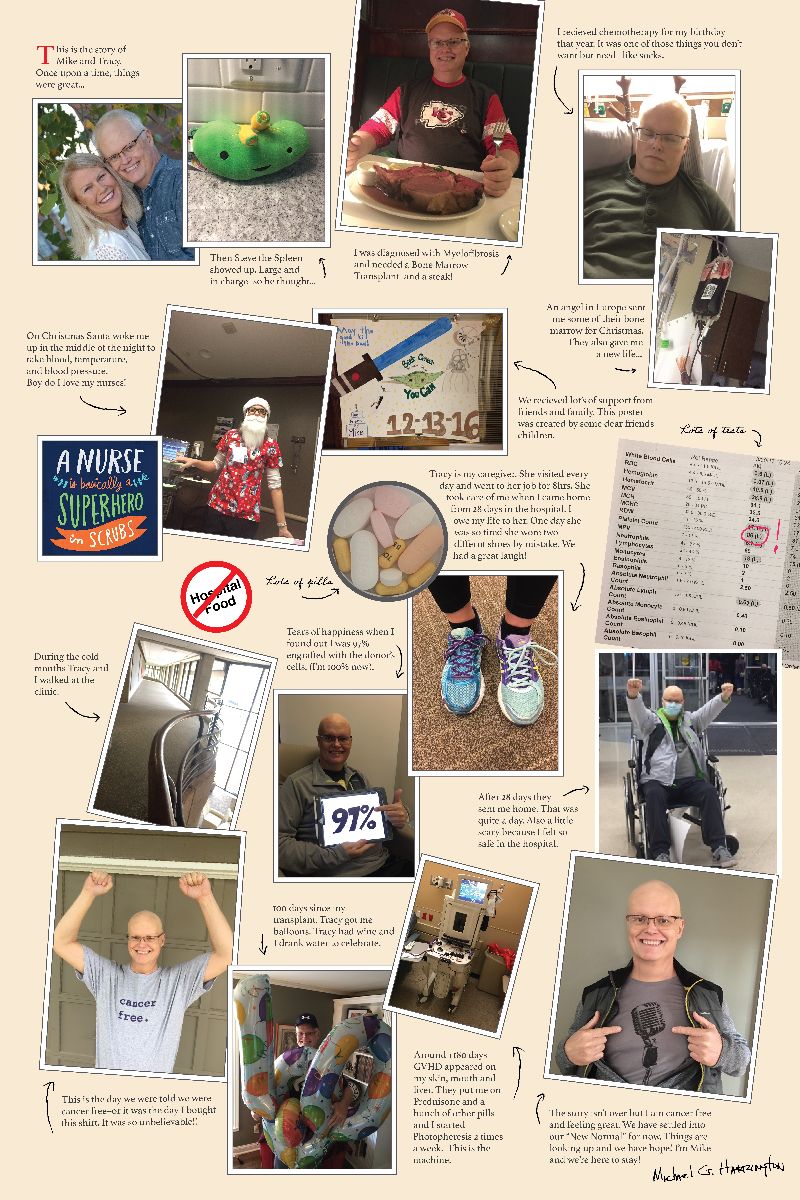 Provide support for other MPN Patients.

Living with an MPN can be challenging. You are not alone.

These represent first person accounts of real people living with Essential Thrombocythemia, Polycythemia Vera and Myelofibrosis. It does not represent the views or opinions of anyone associated with the MPN Research Foundation. Please consult your doctor before taking any action to manage your health.